So… earlier today… I watched this interview with Maffew. You know. The guy that’s behind the cult of YouTube videos known as Botchamania. I watched it cause I was bored. And I seriously wasn’t planning on finishing the whole 24-minute thing. But oh wells.

Two things I learned while watching it (it took place some time in January, apparently).

The first being that WWE is thinking about bringing back the Hardcore title. I’d love it if that happened. But that’s probably just me.

The second being there’s a Chris Benoit movie currently in production. Well… according to IMDB, it’s in pre-production.  But yeah. Whatever. It’s “on the way.” Whatever.

Sadly, apparently, the movie is going to focus, MOSTLY, on his last days. Although Eddie Guerrero is going to be a major character in it. I dunno. As the apparent writer of the movie (Sarah Coulter) said:

“Chris had a remarkable career. You take a look at his time in Japan and with Stu Hart, and you realize that you’ll need more than one movie to tell the entire Chris Benoit story. Ultimately, it’s about the 2007 murders/suicide, so we had to pick and choose the right moments in Chris’ career that may have been factors in his downfall.”

So yeah. The movie itself? I dunno how I feel about it. It’s going to take a HARD anti-wrestling stance. Obviously. Which. I guess is OK. Given the circumstances. I’m sure I’m going to like the movie no matter what.

Something that was discussed during the aforementioned interview…

Who would play Chris Benoit?

The first name that came to my head would be Collin Farrell and/or Jude Law was there. Seriously. They’re pretty much the same person in my head. So. Either or. Really.

Apparently… Liam Neeson turned down the role of Vince McMahon. And since I heard that… I can NOT think of ANYONE else who could play “the boss.”

Eddie Guerrero? Eh… only name coming to me is Benicio Del Toro. But that WOULD NOT work.

And yeah. According to Sarah, those are the only names appearing in the movie. Thus far anyways.

The biggest problem? WWE is NOT going to go for this. At all. How in the living hell they’re going to get the license and shit… I dunno. So… if it DOES happen… it’s going to be shit. More than likely. Like… in the… you know… accuracy department.  Or something. 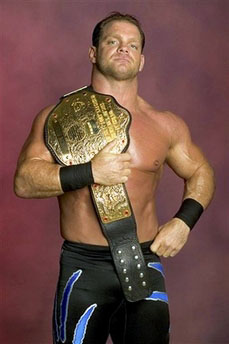 But this comes about the bigger picture. And I TOTALLY covered this over a year ago in another blog.

But I’ll do it again.

Chris Benoit was ONE OF THE BEST WRESTLERS EVER. The end. Period. Bar none. He DOES deserve that recognition. He DESERVES… MORE THAN ANYTHING to be praised for the contributions to the craft he gave his EVERYTHING towards.

How big of a ballsy move would it be for WWE to induct him into the Hall of Fame? It would be THE biggest middle finger to the news media that WWE crusaded against during the summer of 2007. THE BIGGEST. Period.

It’s would be like saying. “Yeah, he fucked shit up. But you know what? We believe in our product enough. We believe in what we do MORE than you could EVER imagine.” It’d be like going on with, “Fuck you. We’re right. You’re wrong. This guy fucked up one weekend. It had nothing to do with us. And as far as we’re concerned, he was a stand up guy. Fuck you. Wrestling prevails. Your distortion doesn’t.”

Penn Jillette would describe it MUCH better than I EVER could. If he gave a fuck about this topic.

But no. They’re going to do what’s politically correct. They’re bending to the media’s mold. They’re censoring Benoit in MOST every instance they POSSIBLY can. No, you CAN’T NOT include the guy from Ric Flair’s Nitro return in September of  ’98. And a couple of other Nitro scenes. You CAN’T have WrestleMania XX without Benoit winning the main event. But yeah. Still… they censor him EVERY chance they can. And I’m sorry. But it’s wrong.

If Einstein had killed his family during the last day(s) he was alive… would he not be considered in a HIGH regard in the scientific community?  You’d be LYING YOUR FUCKING ASS OFF if you say he wouldn’t. He’d STILL be the genius he was today.