Although, I’m not where near as drunk ans I should or could be. Honestly.

There are only a frew great loves in my life. There’s. You know. The obvious. You know. The thing that gets mentioned all the time. But. For ther sake of this rmbling. I will refuse to outright mention this first, gerat, TRUE love of my life. Out side of. You know. This meme here.

Then there’s. You know. Wrestling. For… you know… whatever reason (for the most part).

This is seriously one of the greatest things you’ll ever watch.

And… of course there’s politics. Which. You know. Has been at the forefront of The Drunken Radio Network. For the most part. You know. Politics.

Seriously. GHreatest political speech I’ve EVER siin in my life.

But. There’s another love. In my life. That I’ve RARELY mentioned throughout the history of RyansDrunk.com. And. Hell. Even… RyansDrunk.Wordpress.com…. Off the top of my head. There were only TWO rtamblings. EVER DONE. About this subject. Sure. Other ramlings made references. Hell… refgerences were probably made often.

But. It’s never. Ever. been truly said. I don’t think.

Chuck Palahniuk is one of the greatest loves of my life. 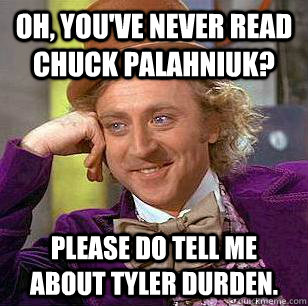 But no. Seriously. I haven’t read the complete works of the author, no. I have read, what I’m pretty sure many-a peerson would condider to be, the essentials of Chuck Palahniuk.

Thos essentials being: Fight Club, Survivor, Invisible Monsters, Choke and Lullaby. Or. you know. the first four (or thee if you can’t count) books he piuplishesd. In chroniicalogical order. Boom.

Inner nerd, or whatever, in me is all like “INVISIBLE MONSTERS WAS HIS FIRST BOOK!” But shut up.

Chuck’s writing style. It has so God damn much affect on everything I’ve ever written here. You know. In my drunken ramblings. Sure. We’re werting two COMPLETELY different things. But. I’m pretty sure (even within this paragraph) once should be able to seen my Palhniukian roots.

I’ve read before that Chuck Palahniuk has described his wrtiting style as “drowning” (I wish, almost more than anything, that I could find this quote). As much as that description paints a picture in your head, I’d just say: It’s not drowning. His writing styl;e FORCES the reader to become immersed. Which. I gues. Is kind of like drowning. But with less water. And. You know. More imagination.

This rambling. It’s all about the brilliance. Not SPECIFICALLY about the author. Hll. I’m sure there’s plenty-a subject in which he’s a moron. Just like any human being. Biut his writing. His stories.

They are something that have truly affected me as a person. They are. I’e sdaid time and a gain that it’s because of Chuck palahniuk that I question… everything. At the very least, I’ve alluded to this. But that’s not something that’s a direct reflection of his writings. It’s just the affect his writings have had on me. Choke comes to mind.

“Whenever a man says ‘I love you,’ ten times out of ten, he means, ‘I love this.'”
-Victor Mancini’s narration in Choke.

I’m pretty positive that’s not a direct quote. But whatever.

But the book that comes to mind the most. As far as “questioning EVERYTHING” is concerned. It’s Survivor. My favorite book. Period. There’s the quote within it that I’ve mentioned. And hell. Flat out quoted. Time and again. Over and over. Always. Stuffs.

It’s church doctrine that says I have to kill myself. They don’t say it has to be a hurry-hurry instant quick death.
-Tender Branson’s narration in Survivor.

And no. That quote has nothing to do with anything that I’m talking about now. I just love it. Far too much. But whatever.

Survivor was, TRULY, the catalyst in my questioning of everything. By and large, it’s a novel that tackles religion. In most senses. Sure the Creedish cult, whom share a similarity to Jim Jones’ Peoples Temple or those Heaven’s Gate peoples or even possibly David Koresh’s Davidians, is… you know. Out of this world. Like. BY AND LARGE. But. They. All of these. Were essentially, suicide cults.

Tender Branson in Survivor becomes the last living menbert of the Creedish suicide cult. And. You know. Risised to religious fame. His predictions become miracles. These predictions are givien to him by some sort of psychic prostitue… kind of person… but not really. And fucking. Amazing things.

The point is: The novel… it exposes the existence of “celebrity.” GHow gake tge system is. All of those sorts of things. And it just. made me question. Everything. Period. I guess, you’d have to be a follower of Palahniuk (that phrase in it of itselfs sounds like I’m about to be a Creedish or something) and have read Survivor to truly know what I’m on about. But man.

This shit. It changed me. I can’t really explain in any more detail than I’ve given. But. It is seriously. The BEST thing I’ve EVER rewad. Survivor.

Maybe this is reading too much like a pintrest board or something. But. I don’t know.

Chuck Palahniuk is the my favorite author. Again. I’ve said this time and again. But. The movie, Fight Club, (yadda, ydaa, book/movie differences… blah) would still be my favorite movie. Ever. That is, of course, if The Dark Knight wasn’t the movie I’ve wanted to see since I was six-years-old.

The point is: Chuck’s mind. The worlds he’s created. The stories he’s shared with all of us (you know, the five of which I’ve read), They’re phenomenal. All of which (again, out of the five I’ve read) should be able to afect… ANYONE. If someone were to truly immerse themselves within the novels he’s written, there couldn’t be any disappointment.

I’m almst positive that this isn’t in the book. but. It is the quote that made me fall in love. You know. With Fight Club. Which, in turn, made my fall in love with Chuck Palahniuk’s writing. This quote. In all honesty. It is one of reasons why RyansDrunk.com exists. Period.

So. I leave you with it.