I’m like. AT BEST. A month behind as far as this topic is concerned. Hell. Halloween’s over. We’re heading into Thanksgiving now! And like. This whole “clown hysteria” thing is officially over and done with.

And like (as I write all of this, it’s no where near the date in which you’re now reading it) even in those before times. In the long, long ago of September of this year. When “clown sightings” were happening all over the country. And it was some sort of clown epidemic happening.

Even during the hight of ALL of it.

There was nothing to fear about from clowns. Ever. At all.

Most clowns are just dudes. Tryna work a birthday party gig. You know? Sure. Maybe one in every 10,000,000 you’re going to get a John Wayne Gacy. But if you’re going to be paranoid about that. More than likely you should be FAR MORE paranoid by the fact that you just considered my proposed “fact” that there are, actually, 10,000,000 clowns on the earth. Like. Before that last sentence or two. You ACTUALLY thought that there were 10,000,000 clowns in the world. Just because i “said there were.”

That should be MUCH more terrifying. Seriously.

And. I’m talking CLOWN clowns here. I’m not talking political clowns. Or like. Leonardo Di Caprio oir something. Nothing like that.

But I promise. I digress from here.

an abnormal fear of clowns.

Coulrophobia. Is. “an abnormal fear of clowns.” It’s not recognized by any sort of medical… anythimg. No, legitmate medical journal recognizes it. Ity CERTAINLY isn’t recognized by the World Health Organization (WHO). And it’s not even recognized byt the fucking American Psychiatric Association’s DSM-5. And fucking even (it’s called something like) Intermediate Explosion Disorder is recognized by the APADSM. (IED, as I called it there, = All of a sudden being REALLY angry).

This nonsense about Coulrophobia. Is. Nonsense. Siure. You can be afraid of clowns. Hence. You know. The term. Coulrophobia exists. But it truly is. Abnormal.

In all honesty? Where this all comes from? It all stems from this shit: 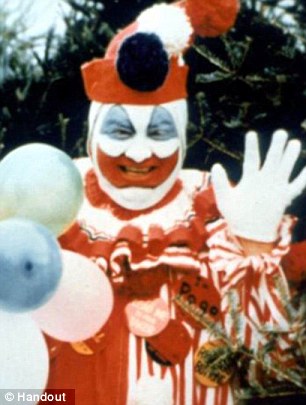 John Wayne Gacy. This serial killer would dress up as a clown sometimes. You know. Outside of doing his crimes. You know. He never dressed like a clown before killing someone (I’m pretty positive of that. But that’s just a fact I pulled out of my drunken ass). But since he, legitimately is/was a scary fucking guy. That there photo of a clown is deemed horrifying.

Then there is. Of course. The next biggie.

Stephen King wrote a book. There’s a clown in it. And the clown has fangs and it’s scary.

And then John Boy and the rest go and kill a big, gigantic spider. Biggest spider you ever seen, folks. Believe me.

And then. It becomes some sort of cult phenomenon. Because. Reasons. I guess.

But now. You’ve got the guy that basically created this coulrophobia nonsensee. He’s saying THIS today:

Next? Really? THe only time that Coulrophobia pops up in pop culture?

Look man. I’m not one to judge someone for their beliefs in what’s scary or creepy or not. I promise.

Come on man. Come off it already.

If your nonsensical fear is GREATER than the good that the Ronald McDonald clown mascot has done for fundraising? And like… cancer research and every-fucking-thing else that’s been done by the Ronald McDonald House and stuffs. You are a piece of shit.

If THIS image TRULY scares you half to death?